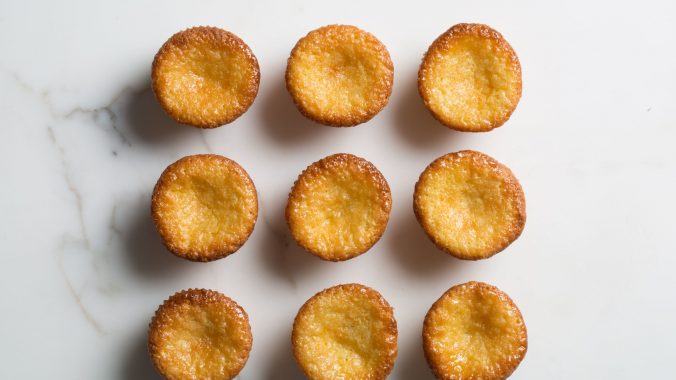 Rosewater Take Two: Once is Not Enough

After the ghraybeh (Lebanese butter cookies) didn’t show off the rose water very well, I knew I wanted to try again. We were going for Sunday dinner at my dad’s house so I said I would make dessert. I had been perusing the Zaitoun cookbook by Yasmin Khan and Sweet by Ottolenghi and there were a couple cakes in them that were calling me. 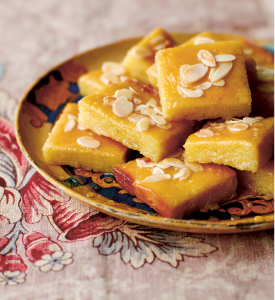 My original plan was to make the Semolina and rose water slice cake from Zaitoun (the picture to the right), but I got a bit confused when it came down to starting. I blame cloudLibrary somewhat here because it is way too easy to flip back and forth between books and lose track of whats happening. So I prepped the ingredients for the Lemon and Semolina syrup cakes from Sweet instead before I realized what had happened. The problem was this recipe said in the introduction that it could be flavoured with rose water syrup (or orange blossom), but only gave the directions for a citrus syrup instead. So I took some of the measurements from the Zaitoun recipe to try to approximate the rose water amounts. 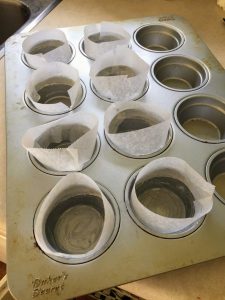 The recipe was super simple to follow and the batter mixed up quickly. It makes 8 mini cakes using a muffin pan. Making parchment collars was a new skill for me, and not one I have totally mastered yet but I am not afraid to try again! The batter has lemon zest in it and each mini cake has a thin lemon slice on top. I had to trim the edges of the slices to get them to fit. 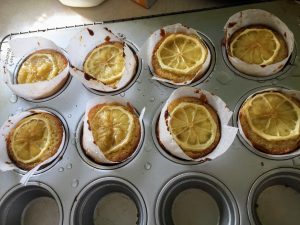 My oven always runs a little cool so I would bake these at 350 rather than 325 next time, but that’s probably different for everyone. It just took a little extra time to back and I never got the caramelization on the lemons that the recipe called for.

When it came to making the syrup, first I followed the ‘Sweet; recipe (1/4 cup each of sugar and lemon juice) and added just a 1/2 tsp of rose water. But the lemon was so strong and really over powered everything. My kids were going to be eating this too so I didn’t want it to be quite so strong with lemon flavour. So I added a 1/4 cup of water and another 1/2 tsp of rose water. Then even more rose water just by eye! The flavour of the syrup at that point had a perfect balance (to me) of lemon, sugar and rose water. Just enough floral to give that turkish delight style magic. Then the syrup just gets brushed on as soon as the cakes come out of the oven, with the cakes still in the pan. They really soaked it up! 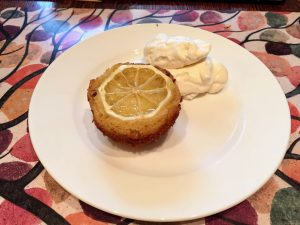 At my dad’s house the cakes were a major hit. The recipe suggested serving them with yoghurt or creme fraiche, but we went with whipped cream just to be a crowd pleaser. I found I like the cake plain though to really let the rose water flavour come through. The tops of the cake, which had the most syrup were the best part. My dad, granny, cousin and husband all loved the cake. The kids were a little more fond of the whipped cream.  But the adults even gobbled up the lemons from the top.I will make these again, or probably try the Zaitoun recipe first, but this is definitely worth a repeat. I would like try it as a round cake though rather than the minis. I would use parchment on the bottom of the pan too because  I had a lot of sticking even with liberal butter on the pans. I would make double the amount of syrup to make sure the cakes were drenched all the way to the bottom with syrup. Yum!

Yottam Ottolenghi also made a version of this cake for Bon Appetit (my forever fav website) which you can find here. This version has slightly different measurements than the one from Sweet but from a first glance I think it might just be for a larger batch. This recipe also doesn’t have lemon slices on top. But I recommend giving it a try! (The featured photo up top is from this recipe)