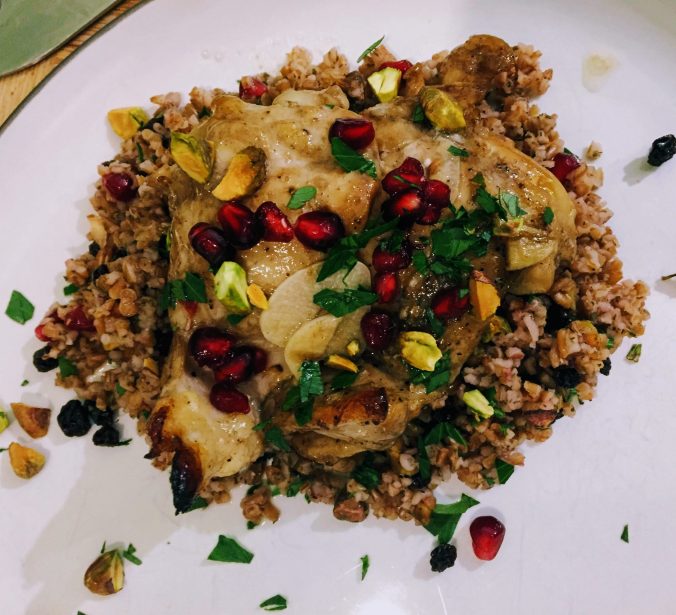 I made the pomegranate molasses chicken recipe from Honey & Co. for dinner this week. Because it was a weeknight I prepped and marinated the chicken the night before. I learned something about pomegranate molasses that I wasn’t expecting – all the solids had settled in my bottle so even though it looked like I had a lot, only a small amount of liquid was actually left. I think I was supposed to be shaking it before use each time? Lesson learned, because then I didn’t have enough for the recipe, but only by a little bit. Back to Fig to get more I guess!

It was super easy so I will definitely be making the chicken again. The recipe also included a bulgar wheat salad with pomegranate seeds, toasted pistachios (only toast them for 10-12 mins, not 15 because they will go too dark!), mint, parsley, and more pomegranate molasses. Since I was out I just used some of the juice from my pomegranate. You serve the chicken on top of the bulgar and pour some of the sauce/juices from the pan over the whole thing. I would add more salt next time overall, but it was excellent. I really love mint and need to plant much more in my garden in the spring.

Bonus: my kids love pomegranate seeds almost too much, and it made great leftovers

PSA: How to get the seeds out of a pomegranate!